Published in the January/February 2007 Issue of
Organic NZ Magazine.

It’s not a place you simply pass through. Karamea is off the beaten track an hour and a half’s drive north of Westport, with a warm climate and plentiful rain that supports lush grass for dairy cows, and subtropicals like tamarillos and feijoas.

The drizzle turned into steady rain as I walked to Otumahana, Margaret and Hamish Macbeth’s property just
south of the township, near where I was staying. It’s a 3.2 hectare narrow strip of flat land between the Otumahana Estuary and the road. On the east side of the road is a small market garden and a planting of tamarillos, and immediately beyond them the hill rises steeply, with canopies of rata and the umbrellas of tree ferns standing out amongst the thick bush. 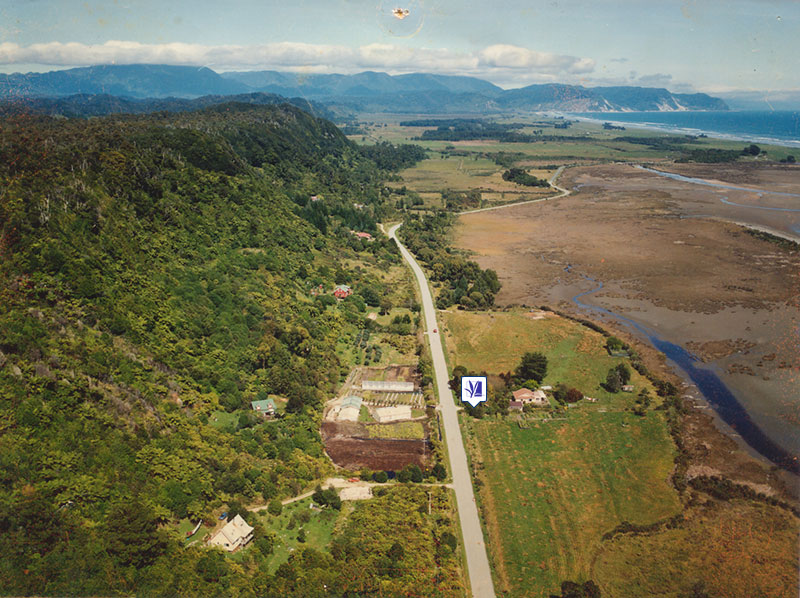 Here by the estuary there is a light frost only once every year or two, but inland there are more frosts in winter – such as in the Wangapeka Valley, where the Macbeths raise a few beef cattle and sheep on a separate property.
Karamea’s average annual rainfall is around two metres – less than other parts of the West Coast, but considerable nonetheless. Recently however it has been experiencing climate change, and in the past year has had about half the normal rainfall.

“You’ve come on one of the wettest days we’ve had for a while,” said Margaret as I arrived. We sat and talked over a cup of tea to the drumroll of the downpour, and I had to return the next day when the rain cleared to take photos.

Margaret and Hamish moved from Christchurch to the West Coast in 1984, to a spot even more remote than Karamea, accessible only by walking an hour and a half down the beach south of Little Wanganui (south of Karamea). There they lived a life of self-sufficiency with a few other families, with the aim of bringing their children up in a safe, healthy environment, and teaching them to be independent and live with integrity. Gardening was hard, but they managed to grow on a soil Margaret describes as “rock and sludge”, and once or twice a year some bulk supplies were airlifted in by helicopter. Hamish was employed as the teacher at their own little school, but when people began leaving, they could not continue making a living there.

So they moved to their present property and investigated crops that they could grow. After some research, the
Macbeths established True Blue Organics in 1996 with an initial experimental planting of Australian tea tree
(Melaleuca alternifolia). Margaret got some seed from a tea tree plantation in Australia, and the original plants are still going strong. They began the three-year process of becoming certified with Bio-Gro.

Tea tree’s natural habitat is on the edges of swamps, so with the high water table at the Macbeths’ property, the plentiful rainfall and the mild climate of Karamea, conditions were ideal. There was the added benefit of being the first, and still the only, organic tea tree oil producers in the country. The plantation now has 4000 trees.